Protest the unfair verdict in the Dong Tam case (Vietnam)

Death sentences and life imprisonment for the villagers of Dong Tam 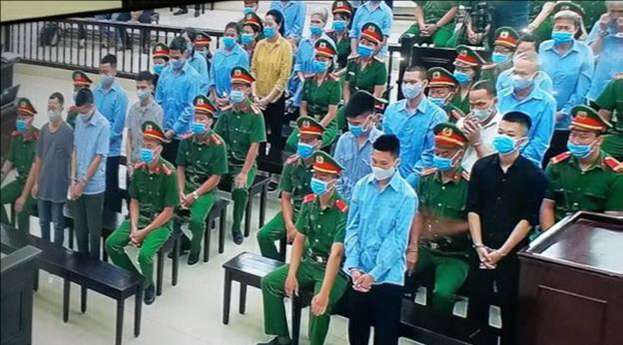 On Monday September 14, 2020, a court in Hanoi, Vietnam has sentenced two brothers to death in regards to a deadly land-rights clash in January at the Dong Tam commune. The other 27 people on trial were given sentences ranging from life imprisonment to 15 months suspended.

The Alliance for Democracy in Vietnam strongly opposes the unfair verdict in the Dong Tam case on September 14, 2020. The Vietnamese government needs to engage in respectful dialogues and fair negotiations to solve land disputes peacefully rather than resorting to violence with such brutal sentences imposed on 29 Dong Tam villagers.

““I categorically and unequivocally condemn the outrageous “Dong Tam Massacre” and the blatant attack on the rule of law, the right to defend one’s land and property, freedom of expression and the right to protest. I call on the government of Canada to apply Magnitsky sanctions against public officials (or their associates) from the Socialist Republic of Vietnam responsible for or complicit in perpetrating gross violations of human rights. It is high time for Canada to go beyond the rhetoric and take decisive action.”
___Senator Thanh Hai Ngo, Senate of Canada

““The shameful Dong Tam villagers’ trial will go down in history as among the most bizarre and brazen trials of those who were turned into murderers and sentenced to death for having protected their father and grandfather from being killed.Even if they did cause the deaths of the 3 policemen on 9 Jan 2020, that was either excessive legitimate self-defence or killing while under an extreme state of mental or emotional anguish.Since long ago, the court [in communist Vietnam] has always been used as a tool to wreak revenge on those who dare challenge the power of the communists.But the Dong Tam affair may be the most cruel and crafty act of revenge the socialist regime has wreaked on its citizens for many years until now.”
___Journalist Mr Nguyen Hung, VOA Viet

““The authorities want to muzzle discussion of what happened in Dong Tam and avoid it becoming yet another touch point for popular discontent. Silicon Valley cannot become complicit in this blatant attempt to keep Vietnamese citizens in the dark about human rights violations.”
___Mr. Nicholas Bequelin, Amnesty International’s regional director

““Government officials need to recognise the importance of carrying out dialogues and negotiations with farmers to solve land disputes like Dong Tam in a peaceful manner rather than using violence.”
___Phil Robertson, Human Rights Watch’s deputy Asia director

““What happened in Dong Tam village was already too tragic, [authorities] should not kill more people to make the situation even more tragic.I have no modicum of hope for a fair trial. The defendants had been illegally detained. The trial clearly unfolded the way the trials under Stalin unfolded … The Dong Tam affair is a miserable failure in a war that the Vietnamese Communist Party under Nguyen Phu Trong has declared against the Vietnamese people.”
___Mr Nguyen Hưu Vinh, Fb of blogger and former prisoner of conscience

Quick facts•Residents complained that about 50 hectares (124 acres) of their land had been unfairly taken over and handed to the Viettel Group, Vietnam’s military-run communications company.

•The dispute first came to wider public attention in 2017, when four people were arrested for “disturbing public order” in protests against the land acquisition.•On January 9,2020at least 3,000 policemen carried out a raid on the village, whose land ha dbeen seized to build a military airport and for building speculations. In the clash between the locals and the police, in addition to the three deceased policemen, the village elder, 84 year old Le Dinh Kinh, was shot and killed by policemen. In response, the authorities accused Le Dinh Kinh’s family, Le Dinh Chuc, Le Dinh Doanh and Le Dinh Uy for the murderof the three officers. Along with them, 27 other local people are accused of complicity in the murders.

Fb of famous blogger and former prisoner of conscience 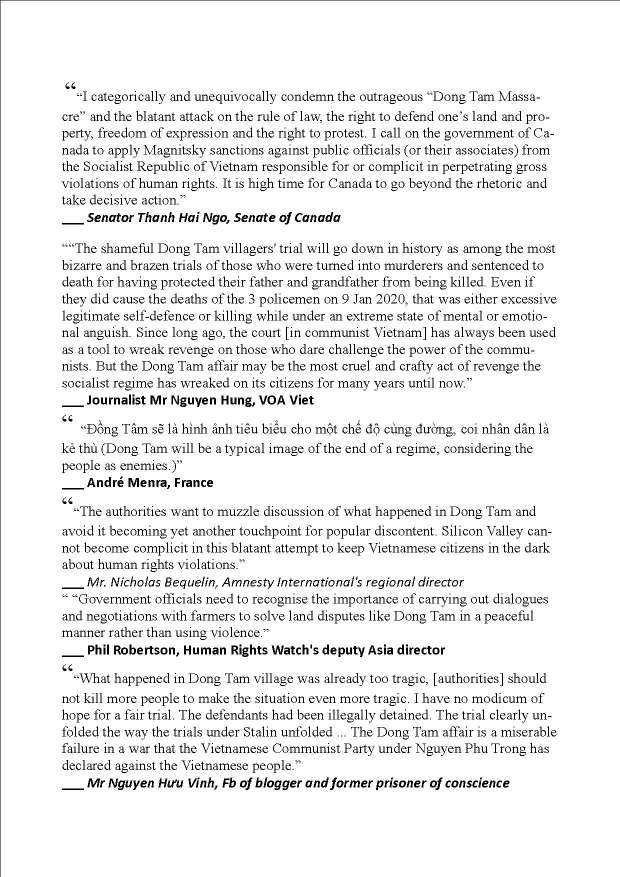 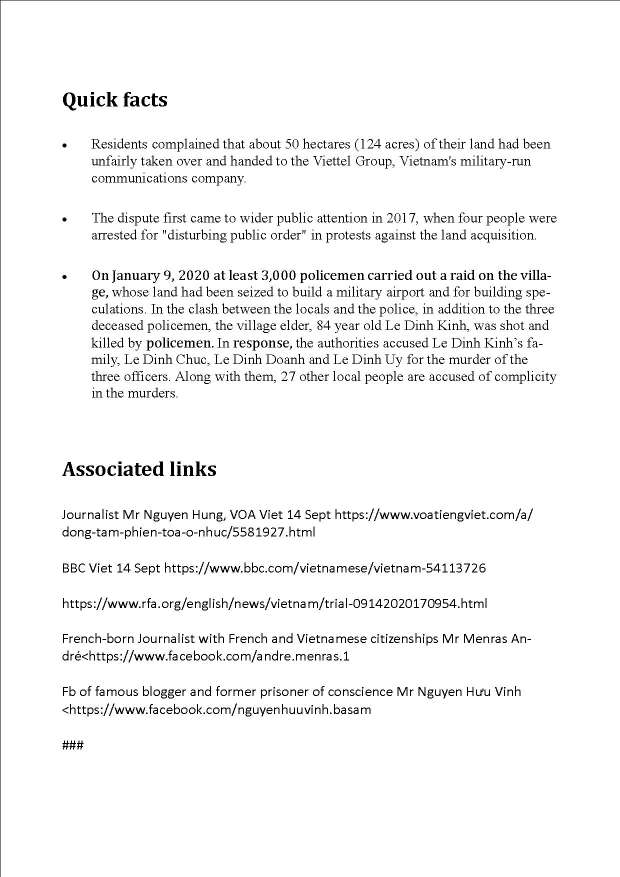 This entry was posted in .English, LMDCVN, Nhân Quyền and tagged Đồng Tâm. Bookmark the permalink.